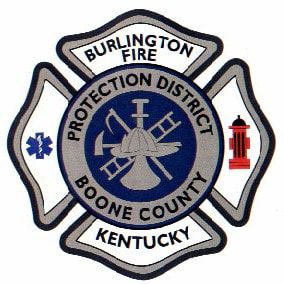 Get to know your Fire Department

Who we are
The Burlington Fire Protection District is a combination fire department comprised of a diverse group of men and women dedicated to preparing for and responding to your need- anywhere around Burlington- at any time of the day or night, every day of the year.  If this sounds like a broad description, it is.  The District employs 25 full-time personnel, 15 part-time personnel, and they work alongside just over 35 active volunteers, and 10 junior volunteer firefighters age 15-18.  Our Mission statement is simple:

We protect 38 square miles with a population of approximately 27,000 people.  Our community includes farms, numerous residential subdivisions and apartment complexes, commercial businesses, light industry, both county and state government offices, and four elementary and middle schools.  In 2016 we responded to 1,556 EMS calls and 859 fire calls.  These statistics have continued to rise very gradually each year.

Where we came from
Burlington Volunteer Fire Department started in 1943 from a band of concerned Burlington citizens who wanted to reduce the impact of fires and provide care quickly for injured and ill people in the Burlington area.  This started with people volunteering their service, with donated equipment, and many volunteers contributed their own money to keep the department operating for the good of the community.  In the early 1980’s the Burlington Volunteer Fire Department became an independent taxing district organized under Kentucky Revised Statute (KRS) Chapter 75 which allowed the department to collect property taxes to provide fire and emergency medical Services (EMS).

Governance
Today we still exist as a KRS Chapter 75 organization known as the Burlington Fire Protection District.  As a Kentucky Special Purpose Governmental Entity, the District is governed by a seven member Board of Trustees in accordance with Kentucky Revised Statutes.  The Board is comprised of:
Operations
The District directs the Fire Chief to administer an annual budget of $3.7 Million to provide fire protection, emergency medical response, rescue, public fire safety education, and community involvement.  The Fire Chief relies upon the District’s officers including one Assistant Chief, four Lieutenants, and three Sergeants as well as many full-time career firefighters who have program responsibilities for ranging from fire hose inventory and testing to station supplies.  The most significant expenditure is the financial investment in our paid staff to guarantee to the public response capability 24 hours a day.  These dedicated men and women work 48 -72 hours per week and their work is far from routine; it involves frequently having to drop what they are doing with no advance warning to respond to the public’s need.  Meals, showers, sleep, and training are interrupted on a regular basis.  In this working environment it is hard these days to find volunteers willing to give their time and talent with no financial gain to perform these tasks.  However in Burlington, over 45 volunteer personnel contribute to keeping our costs under control while providing the response force needed for emergencies.

In calendar 2016, our volunteers recorded over 20,453 hours of volunteer time.  For comparison, if applying the straight time hourly pay rate of an entry level career Firefighter EMT, volunteers contributed the equivalent of over $268,500 in 2016.  For 2017, the department is on pace to exceed 17,800 hours.  Our department is truly people helping people.

Our tax rate is set annually by the Board of Trustees and is currently $0.17 per $100 of assessed value on real estate property which is the third lowest real estate rate levied in Boone County.  By state statute the maximum the District can levy is $0.20 per $100 of assessed value and this cap has been in place for decades.  Tangible goods and motor vehicle tax rates are slightly higher at the $0.20 maximum rate but those taxes represent only 18.3% of the District’s entire tax revenue.  To give a practical application of the value of the tax investment toward the District’s services, the median sale price for a home in Burlington was $170,750 which would translate to an annual fire/EMS tax of $290.28 for that house.   For a $26,000 car in that garage, the fire/EMS tax would be $52.00 for the year and decline as the car’s value declined.

Fire trucks and ambulances don’t work without people.  To outfit one firefighter with protective clothing, a breathing apparatus, and a radio for communication, the investment in each firefighter is over $6,100.  Equipment costs are also expensive, hose, tools, fans, saws, scene lighting all are necessary items for various emergency work to be accomplished.  A typical fire engine can carry equipment that costs a combined investment of $70,000.  Much of this equipment is re-usable until it wears out from use, reaches the manufacturer’s end of life requirement, or becomes damaged due to the harsh working conditions in which it is used.

This is just a brief overview of the information regarding fire and emergency medical services we provide.  Again, thank you for taking the time to learn about your fire department.  We are at your service.